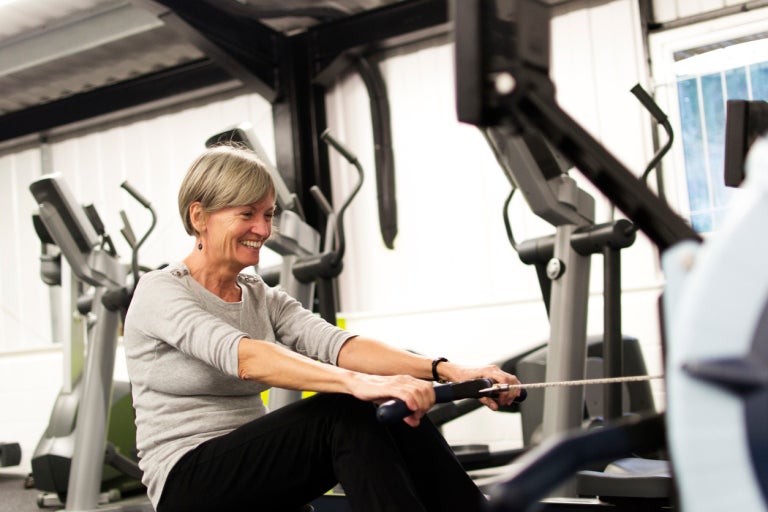 A fit mature woman using the rowing machine in a gym. Image: Mypurgatoryyears/Istock.com via AFP Relaxnews

New United States research has found that exercising several times a week could slow down the deterioration in the brain of those at high risk for Alzheimer’s disease.

Carried out by researchers from UT Southwestern, the new study looked at 70 sedentary participants over the age of 55 with memory problems and split them into two groups.

The findings, published in the Journal of Alzheimer’s Disease, showed that both exercise groups maintained similar cognitive abilities during the study in areas such as memory and problem solving.

However, brain imaging showed that the participants who had an accumulation of amyloid beta in the brain (a sign of Alzheimer’s disease) and who did aerobic exercise for a year experienced a slower degeneration in the hippocampus, a region of the brain crucial for memory, which progressively deteriorates in those with dementia.

The researchers note that although the exercise did not prevent the spread of the amyloid plaques, which kill neurons in the brains of those with dementia, the findings suggest that exercise could at least slow down the progression of dementia if done early enough.

“What are you supposed to do if you have amyloid clumping together in the brain? Right now doctors can’t prescribe anything,” said Dr. Rong Zhang, who led the clinical trial. “If these findings can be replicated in a larger trial, then maybe one day doctors will be telling high-risk patients to start an exercise plan. In fact, there’s no harm in doing so now.”

“It’s interesting that the brains of participants with amyloid responded more to the aerobic exercise than the others,” said Dr. Zhang. “Although the interventions didn’t stop the hippocampus from getting smaller, even slowing down the rate of atrophy through exercise could be an exciting revelation.”

However, Dr. Zhang points out that more research is needed to determine if reducing the shrinking of the brain could also benefit cognition. JB

TOPICS: Alzheimer’s disease, brain, dementia, exercise, Fitness
Read Next
Japan seeks AI system for predicting cyberattacks
EDITORS' PICK
LIST: What to expect in areas under GCQ, MGCQ
PNP to maintain checkpoints during GCQ to ensure compliance to health protocols
Notice of 2020 regular meeting of stockholders June 18, 2020
DOTr bares 2 phases of public transport revival in GCQ areas
SM prepares for ‘safe malling’
Leveling up your ‘lutong bahay’ with the kitchen companion you never knew you needed
MOST READ
LIST: What to expect in areas under GCQ, MGCQ
DOH explains: Only 109 of record-high 539 COVID-19 patients were ‘fresh cases’
Duterte approves Metro Manila’s shift to GCQ starting June 1
300 buses to resume operations in NCR by June 1 — Año
Don't miss out on the latest news and information.