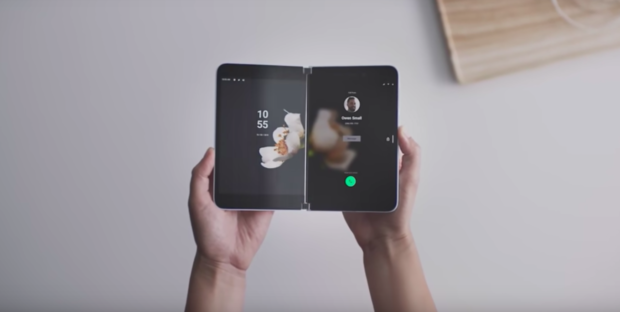 Microsoft’s Surface Duo has the capacity to function as a smartphone, tablet, and laptop. Image: Youtube/Microsoft Surface

Though 2019 marked the year of the folding display smartphone (albeit their malfunctioning and fragility) thanks to companies like Samsung and Huawei, Microsoft announced that 2020 will be its year for the dual-screen folding device.

Earlier this month, Microsoft revealed at its Surface event in New York City two hybrid devices that are slated to launch during the 2020 holiday season. This is the first time that the company revealed a product nearly in full to their audience so far ahead of its release date.

This week Relaxnews had the opportunity to see both products in action — the Neo and Duo — and watch Microsoft executive Panos Panay demonstrate the flexible capabilities of each.

The larger of the two hybrid devices, the Neo, has been designed to function as a tablet and a laptop.

Users have the option to use both screens completely independently from one another: the left side can have Spotify opened, while the right side could be used to read emails.

An attachable keyboard, which is about half the size of one of the displays, can be placed right atop the bottom screen to create a form factor similar to a laptop.

The Duo, the smaller device encapsulating both tablet and smartphone characteristics, has an interface similar to the Neo.

In fact, Panos noted that this model has not been designed to work exclusively as a primary smartphone, though it is possible.

Turning the folding device sideways prompts the interface to rotate, making the “phone” turn into a miniature laptop that is seemingly as powerful as its larger sibling.

When asked for his opinion about phones with folding displays, Panay stated that such devices are “almost unrelated” to dual-screen folding models, as their functioning is completely different.

The positions that the devices can be set in, the interface of the applications and the durability of the materials are not comparable. Though both are folding devices, they fall into separate segment categories.

Because the devices aren’t expected to launch until late 2020, few specs about each have been solidified. While the prototypes demonstrated in New York in early October and this week in Paris are powered by today’s latest processors and technologies, they are sure to be updated as more advanced renditions are released over the upcoming year. CL/JB