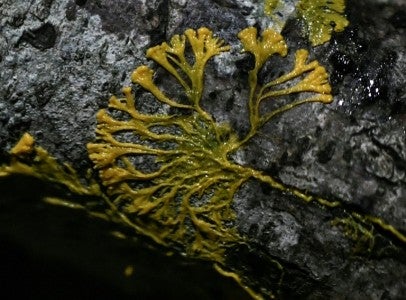 The Paris zoo’s latest attraction is a brainless, eyeless, single-celled organism with no limbs or stomach but more than 700 genders.

Preceding humans on Earth by some 500 million years, the creature resembles a kind of slippery sponge.

It appears stationary, but does cover ground — at a leisurely pace of up to one centimeter (0.4 inches) per hour — in search of prey, such as mushroom spores, bacteria, and other microbes.

From Saturday, members of the public can become better acquainted with “le blob,” which has taken up residence in a large tank at the zoo in Paris’ Bois de Vincennes park.

Named after the 1958 sci-fi horror movie “The Blob” about an alien creature that crashes to Earth and devours residents of Pennsylvania, the real-life blob consists of a single cell, sometimes with many nuclei that can replicate their DNA and divide.

Mostly yellow, but also in varieties of red, white or pink, the blob is found most often on decaying leaves and tree trunks in cool, moist spots such as woods.

“The blob is really one of the most extraordinary things that live on Earth today,” the president of Paris zoo, Bruno David, said as he introduced the creature to journalists in the French capital. “It has been here for millions of years, and we still do not really know what it is. We don’t really know if it’s an animal, if it’s a fungus or if it’s something between the two.”

Long considered a fungus, the blob was reclassified in the 1990s in the group of myxomycetes or slime molds, a subcategory of the amoeba family.

On its website, the zoo marvels at the blob’s “surprising abilities.”

“Even though it has no mouth, stomach or eyes, it can detect the presence of food and ingest it… Cut into pieces, the blob will self-heal in two minutes! It does not have two different sexes, but close to 720, so reproduction is not a problem,” it explains.

The creature can procreate on its own.

But as with most other species, survival is boosted by genetic diversity, which in the blob’s case happens by two genetically-diverse organisms meeting and fusing into a new, single blob.

A study published in 2016 redefined our understanding of intelligence by concluding that the blob, a creature with no central nervous system, can “learn” from experience and change its behavior accordingly.

In lab experiments, scientists observed the slime adapt its route over a narrow bridge to a food source after they introduced an unpleasant, though not harmful, obstacle.

Sloth-like propulsion does not make it an obvious crowd-puller, but the zoo has come up with a plan, setting up an interactive display that includes a speeded-up video of the blob advancing by extending finger-like protrusions called pseudopods.

It may move painfully slowly, but in ideal conditions, the blob can grow at breakneck speed — doubling in size every day.

And it is hard to kill: when exposed to danger, it goes into hibernation and dries out.

In this vegetative mode, “it is nigh immortal,” blob specialist Audrey Dussutour of France’s CNRS research institute told AFP.

“You can even put it in the microwave for a few minutes.”

But just add a few drops of water, and voila! the blob comes to life again, looking to feed and procreate, which it does by producing and releasing spores that grow into new, baby blobs.

“Blobs of any size can be created, there is no known limit,” said Dussutour.

Woman living in van gives up all 300 of her rats

Panther stolen from zoo after rescue from French rooftops