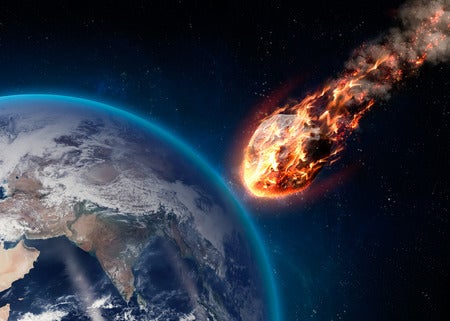 An asteroid estimated to be around the size of the Great Pyramid of Giza may hit the Earth on May 6, 2022, according to the National Aeronautics and Space Administration (NASA).

Despite the one in 3,800 odds — a measly 0.026% chance — of the asteroid smashing into the Earth, the worst-case scenario will surely be of a scene akin to the climax of an apocalypse movie, or even worse, as per NASA via The Daily Express on Nov. 16.

If the “city-killer” asteroid, labeled JF1, is to hit Earth, the impact would be equivalent to the detonation of 230 kilotons of TNT. That is 15 times stronger than the atomic bomb that hit Hiroshima in 1945, which destroyed the whole city with 15 kilotons of force.

Even if the asteroid was to avoid civilization and hit “the remotest part of the Pacific Ocean,” the impact would still be powerful enough to cause devastating tsunamis and “nuclear winter,” the report said.

Scientists estimate the massive asteroid to be around a whopping 420 feet across, or around 130 meters in diameter.

Because of Asteroid Jf1’s potentially devastating impact, NASA Jet Propulsion Laboratory (JPL) has been monitoring the space rock for a decade now, starting when they first discovered it in 2009.

NASA JPL is keeping eye on the asteroid through Sentry, described as “a highly automated collision monitoring system that continually scans the most current asteroid catalog for possibilities of future impact with Earth over the next 100 years.” Ian Biong/JB