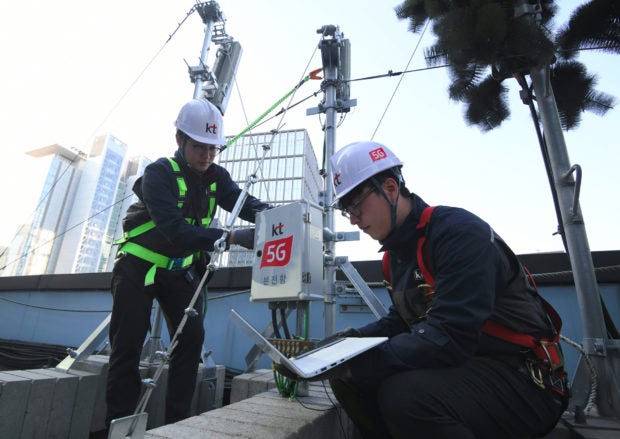 South Korea is one of the countries where 5G deployment is most advanced. Image: AFP/Jung Yeon-Je via AFP Relaxnews

Up to 65% of the world’s population and some 2.6 billion subscriptions will be covered by 5G by the end of 2025, according to the November 2019 edition of the Ericsson Mobility Report.

Also by the end of 2025, 5G is expected to handle 45% of mobile data traffic worldwide, forecasts Ericsson. Up until 2025, the most rapid uptake of 5G will be in North America, where it is predicted that the new technology will account for 74% of mobile subscriptions. Northeast Asia will be placed second with 56%, followed by Europe with 55%.

Beyond the deployment of 5G, the report suggests that by the end of 2025, average monthly consumption of mobile data will have risen to 24 GB per user, as opposed to the current level of a little over 7 GB. The expected increase will be driven by the development of new services and the growth of high-definition video streaming.

With regard to the roll-out of 5G, 2019 will be remembered as a milestone for the deployment of the new technology with providers in Asia, North America, the Middle East and Europe turning on their first 5G networks.

In South Korea alone, where 5G was launched in the spring of 2019, more than three million subscriptions have already been sold. The threshold of 10 million subscribers was exceeded in China.

As for France, where frequencies are still being distributed, technology enthusiasts will have to wait until the second half of 2020 for the first consumer offers.

2020 will be a critical year not only for the emergence of 5G offers in a number of countries, but also for the launch of new 5G handsets, which are compatible with the new services. IB/RGA