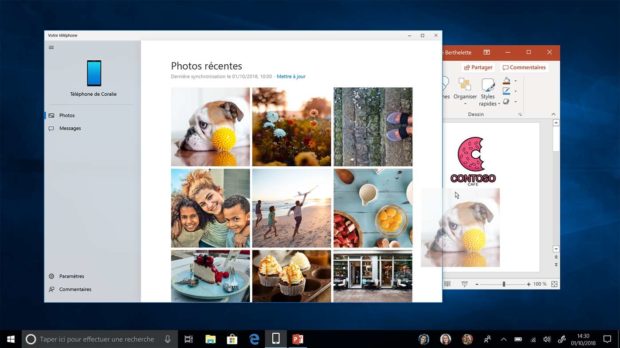 The new Your Phone application allows you to view photos on your smartphone and to send text messages from your PC. Image: courtesy of Microsoft via AFP Relaxnews

The latest update of Microsoft’s Your Phone application allows you to make calls directly from your PC, without using a smartphone. For the moment, the new functionality only works with Android handsets.

The application Your Phone first emerged at the end of 2018 in a major update of Windows 10. It allows you to enjoy some of the features of your smartphone directly on your PC, without having to connect to it with a cable. For example, you can access photos stored on your phone and easily share them in documents or emails, and also receive real-time notifications and SMS messages, all from your PC without having to pick up your cellphone.

The application is compatible with all Android and iOS handsets, however, the new feature that enables the calls is only available to smartphones running Android (version 7.0 or later).

The new functionality has been extensively tested by the Windows Insiders program. Once launched, the application allows you to call contacts or all-new numbers from your PC. It is also possible to reroute calls from your cell phone to your computer.

This latest update will be deployed progressively. CL/JB