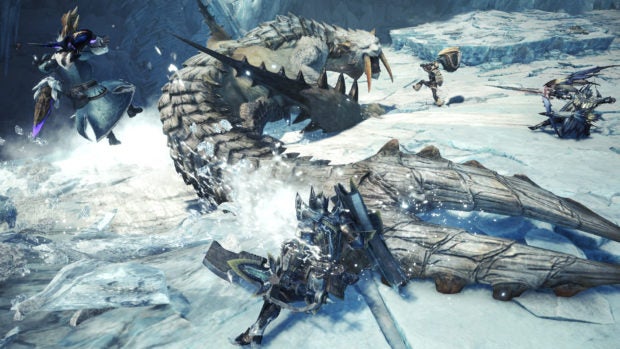 Like its parent, “Monster Hunter World: Iceborne” hosts teams of up to four players online. Image: Capcom via AFP Relaxnews

After shattering expectations through global hit “Monster Hunter: World”, Capcom’s massive franchise gets a new pair of legs through the PC release of expansion pack Iceborne on Jan. 9, 2020.

Released onto PlayStation 4 and Xbox One in January 2018 and then, eight months later, as a PC edition, “Monster Hunter World” finally took one of Capcom’s biggest franchises and made it an international hit.

The Japanese franchise as a whole had been going since 2004, retaining a following of hardcore enthusiasts ever since, but struggled to break out of its niche in terms of global reach.

By targeting increased accessibility without losing too much in the way of lore, loot, teamwork and beast-besting thrills, “Monster Hunter: World” became Capcom’s best-selling game in publishing history, surpassing even the most popular entries in its “Resident Evil” and “Street Fighter” series.

The Iceborne expansion promises more of the same, with players setting foot on a new subcontinent defined by polar extremes, both in terms of weather and colossal animal inhabitants.

It, too, was met with critical acclaim and commercial success upon a September 2019 debut for PS4 and XBO.

This time, PC players have not had to wait as long to get their teeth sunk in.

Despite its size — at 48 gigabytes for the download (sans High Res textures), it takes up more disk space than “Monster Hunter: World” did at launch — Iceborne still requires ownership of the original game, despite earlier suggestions that it would not.

However, that should not post too much of a problem: “Monster Hunter: World” itself was a consistent presence in Steam’s top 10 bestselling games over the year-ending the Winter Sale, calculated by revenue, during which time it was subject to a 60% price reduction; it finished 2019 as one of the PC gaming service’s top 12 sellers of the year, indicating that players are on board and ready for another round of titan-walloping in 2020. CL/JB

Henry Cavill added to ‘The Witcher 3’ by fans