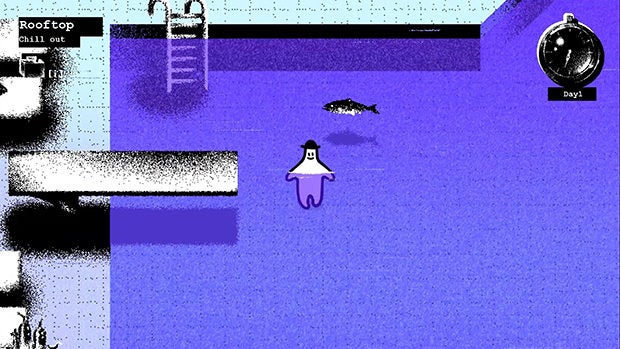 See? Definitely not a ghost. Just a real person just bobbing about an odd and friendly hotel. (A real person with no shadow.) Image: Studio Sott via AFP Relaxnews

What even is “Hotel Sowls”? Somewhere that a well-earned vacation can turn into a mildly ridiculous, effortlessly amusing treasure hunt.

Imagine being a hard-working pharmaceutical scientist who looks a bit like a wobbly, cuddly ghost. You’re definitely not a ghost though. Right? Just a nice, hat-wearing pharmacologist. Everything is normal.

Anyway, where were we?

Next, imagine that after a lot of effort, you’ve just come into possession of a valuable stone with special properties, a stone that will let you make all kinds of useful advancements.

You check yourself into a nice hotel and set about settling in, but upon waking in the morning you notice that the rock’s disappeared.

But let’s not get stressed, at least not yet. This isn’t that kind of game — there are still five days to amble about the premises, passing time with staff and guests, poking about in hidden rooms and messing about in mini-games while you track down that rare geological find.

With a distinctive visual style that contrasts cute cartoon animated characters and dot-matrix objects, all floating on a gorgeous minimal soundtrack, Korean-made “Hotel Sowls” could have gone scary, but for the most part is having too much fun being adorably silly and light-hearted.

Once the mystery’s solved, there’s still a good bit of replayability in the pocket-change purchase, thanks to a hotel’s worth of chortle-worthy chats and secrets, plus an armful of in-game achievements.

“Hotel Sowls” is available now on Mac and PC through Steam. CL/JB