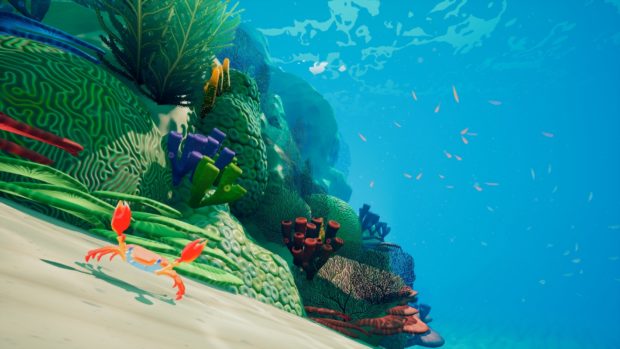 Can an idle conversation change the course of a person’s life? The team behind “Mythic Ocean” thinks so.

As the first release from three-person, Texas-based studio Paralune, “Mythic Ocean” takes players down to the seafloor, where eels and jellyfish play, flatfish gaze at the stars and world-forming gods have begun to grow.

Down here among the coral, small talk can have big results. Chatting to these curious beings about their hopes, fears and feelings influences how they develop.

Those conversations ripple out, affecting who might end up shaping a new world, and how that next planet turns out.

Members of Paralune’s three-person team previously worked on games in the “Skylanders”, “Crash Bandicoot” and “Guitar Hero” series, and the serene “Mythic Ocean” retains a similar ethos of all-age accessibility.

Like “Skylanders”, it encourages players to explore their environments, replacing combat with the sort of choices found in a visual novel or choose-your-own-adventure story.

This time, as well as exploring reefs, caverns and sunken temples, players can explore each cosmic deity’s emerging personality (and perhaps, through them, their own), tracing a branching, conversational design that lends itself to multiple playthroughs.

Paralune strove to provide something for players of all ages, the game’s writer, designer and composer Darren Malley told Relaxnews over email in the lead-up to release.

A free demo, “Mythic Ocean: Prologue”, was released in October 2019, greeted by a very appreciative audience — an impressive 96% of user reviews on PC gaming platform Steam were positive.

Its themes of connection, growth and discovery are carried over and explored even more fully in the final game, Malley explained.

The full version of “Mythic Ocean” launches for Windows PC through Steam from Jan. 9, but does not necessarily stop there.

“If the game does well enough on PC, we hope to bring it to other platforms as soon as we can,” Malley said. CL/JB