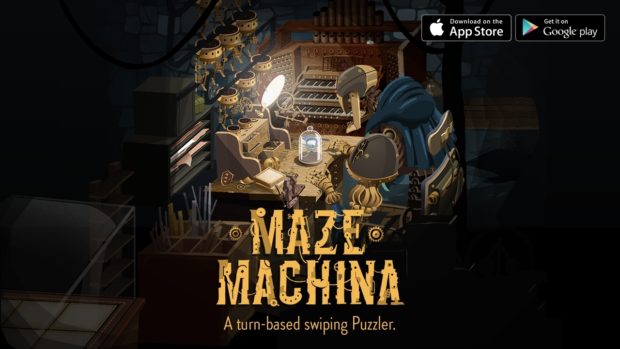 For a brave, blue-cloaked, heroic mouse, there’s one way out of this 4×4 mechanical labyrinth: getting the best of a cog-powered army with a dose of smart thinking and some nimble feet.

Unfortunately, you’re the captive mouse tasked with testing them out.

Penned within a glass-topped display case, 16 tiles lie beneath your nimble feet, each bearing a symbol that can enhance your movements in some way.

Each five-to-ten-minute game session is designed to deliver a quick burst of intense play, says the three-person team behind “Maze Machina”, with simple swipe-based interactions laid over endless combinations of attack, defense and utility moves.

Its designer previously worked with the same collaborators on the top-rated “Card Crawl” and “Card Thief”, hence visual similarities, then brought a tactical approach to grid-based action in “Enyo” before taking the concept in a different direction through turn-based “Maze Machina”.

“Maze Machina” is available for iOS and Android. IB/JB