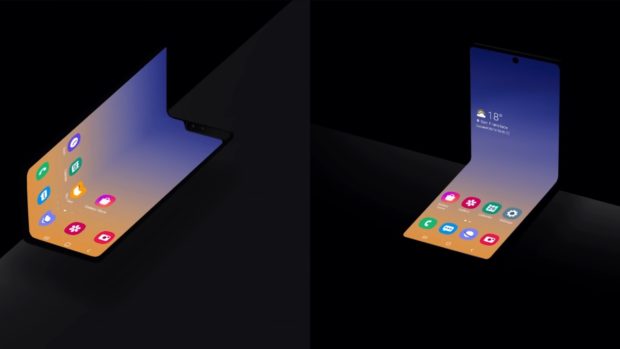 While the technical specifications of its future flagship smartphone, the Galaxy S20, have already been circulating for some time on the internet, now it’s the turn of Samsung’s Galaxy Z Flip phone, the brand’s upcoming foldable screen model, to be the subject of online leaks.

Samsung’s second smartphone with a foldable screen, the Galaxy Z Flip will offer a completely different form factor than the Galaxy Fold. It appears to take the shape of a clamshell-style design, along the same lines as what Motorola is offering with its brand-new Razr.

Several social media accounts specializing in tech industry leaks have published what are claimed to be the defining technical characteristics of the future Samsung device. It appears set to have a screen of 6.7 inches once it’s completely unfolded. While it won’t have the latest-generation processor, it is slated to have a high-performing Snapdragon 855 and to be available in just one version with 256 GB of storage. As for its photo-taking capabilities, owners will have to settle for a setup of two rear cameras.

While those specs may seem average in comparison with what Samsung is capable of proposing, it’s almost certainly intentional so that the brand can market the model at a more accessible price than the Galaxy Fold.

The Samsung Galaxy Z Flip could be announced at the same special Unpacked event as the new Galaxy S20, scheduled for Feb. 11. IB/NVG