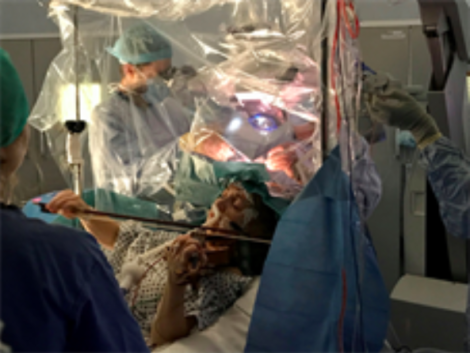 Due to a musician’s wish to retain her ability to play her instrument, a group of medical practitioners in London, United Kingdom tried an out-of-the-box idea during her surgery.

The 53-year-old Dagmar Turner played the violin while surgeons performed a craniotomy (a procedure which involves opening the skull), to remove a tumor in her brain. The surgery was done in King’s College Hospital last Tuesday, Feb. 18, as per the hospital’s official website.

Turner, a violinist in the Isle of Wight Symphony Orchestra, said it would break her heart if she could never play her instrument again. She was diagnosed with glioma in 2013 after suffering from a seizure during a symphony performance. Luckily, professor Keyoumars Ashkan from King’s College Hospital shared the violinist’s passion for music and understood her concern.

Before Turner’s operation, Ashkan and the neurosurgical team carefully mapped out the patient’s brain. They identified the areas that became active when Turner played the violin, especially those responsible for controlling language and movement, as stated by the hospital. They also discussed waking Turner in the middle of the procedure so she could play the violin.

The tumor was located in the right frontal lobe of her brain which is close to the area that controls the fine movements of Turner’s left hand. The musician’s left-hand movement is crucial to her violin playing since it is the one she uses to regulate the length of the violin strings by holding them against the instrument’s fingerboard to produce the different pitches.

To accomplish the experimental surgery, a team of surgeons, anesthetists and therapists assisted in the procedure. When Turner was playing while her tumor was being removed, anesthetists and a therapist monitored the patient closely, the hospital said.

Ashkan revealed that Turner was the first patient they allowed to play an instrument in the middle of a brain surgery. After the procedure, he also reported that they were able to remove 90% of the tumor, this included the areas that they suspected had aggressive activity. They also managed to retain the full function of her left hand.

Three days after her procedure, Turner was able to go home to her husband and son. She will also be monitored closely by her local hospital as she hopes to play with the orchestra again. JB