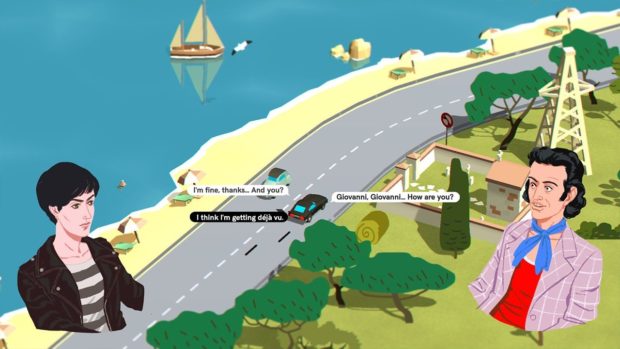 Named after a coastal road, “Wheels of Aurelia” takes players on a hitchhiking trip along western Italy. Image: Santa Ragione via AFP Relaxnews

“Just Cause 4,” a ludicrous action game embedded in extreme weather systems, and “Wheels of Aurelia,” a somewhat whimsical road trip down the Italian coastline, head up this week’s scheduled giveaways from the Epic Games Store.

Both are available for PC, with “Wheels of Aurelia” also running on Mac, and the giveaway available until a new one swaps in on April 23.

Set to go live from April 17 through Steam are giveaways for “Gamecraft,” which is a game creation suite inside a sandbox environment with some similarities to “Minecraft” creative mode, and “Polyball,” a ball-rolling adventure with influences from “Mario Kart” and “Sonic the Hedgehog,” of all things.

Don’t forget that PlayStation is giving away dune-to-dreamworld trek “Journey” and three-game action spectacular “The Nathan Drake Collection” until May 6.

It’s possible to claim them by creating a PlayStation Network account via web browser. That might be worthwhile for anyone without a PS4 right now but intending on obtaining one later—or a PS5 should backwards compatibility shake out kindly.

Missing school? On iOS, have a look at “Pocket Academy,” a school administration game from the kings and queens of pixelated isometric simulators, Kairosoft.

For Android players, the Google Play store has overt “Pokémon” homage in “Neo Monsters,” which is all about training wild creatures, and tribute to classic real-time strategy “Warcraft,” “Cartoon Craft,” available for nothing. CL /ra