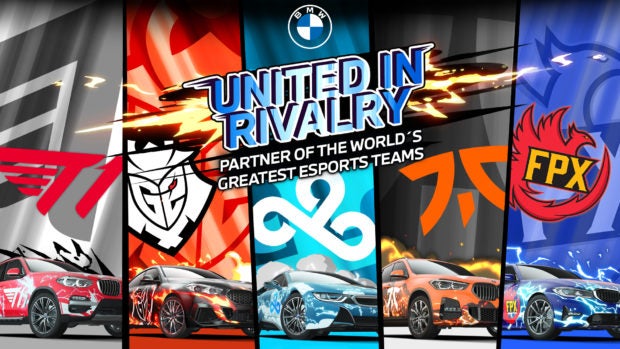 After partnering with “League of Legends” for the 2017 European Championships, BMW is expanding its team partnerships from one to five.

BMW announced its sponsorship of Californian esports organization Cloud9 in early 2019 and is now extending its gaming presence to include not just C9 but some of its fierce competitors through a program it’s calling United in Rivalry.

Thus Europe’s Fnatic and G2, China’s FunPlus and Korea’s T1 Entertainment & Sports are to benefit from BMW vehicles dressed in branded liveries, as well as unspecified hardware and software products developed with the help of BMW engineers and designers.

Each of the five has professional teams engaged in the “League of Legends” competition, while BMW gains a new route into other popular esports scenes such as those for “Dota 2,” “FIFA,” “Fortnite” and “Rocket League.”

While financial terms were not disclosed, the teams are to receive BMW vehicles dressed in branded liveries, as well as unspecified hardware and software products developed with the help of BMW engineers and designers.

Why would BMW want to get so heavily involved in esports?

Elevating its presence across the sector is part of “helping BMW on its journey to becoming an emotive brand people relate to,” explained Jens Thiemer, the prestige car company’s senior vice president for customer and brand.

“Esports shows us how sports entertainment can continue to thrive and play a key role considering today’s challenges,” he said, expressing a desire for BMW to “help shape the discipline in the long term.” CL /ra