BARCELONA, Spain — From the street, where passers-by can see only a falling-down sign saying “canned food,” the building looks like an abandoned grocery store in one of Barcelona’s seediest downtown neighborhoods.

But hidden away inside is a group of cyber activists who, equipped with the Internet and a hope of bringing change, are bent on stamping out Spanish corruption that many feel has spiraled out of control.

And the secretive members of Xnet want others outside Spain to follow their lead.

Xnet invites leakers to pass on documents that provide evidence of possible corruption, inspired by the WikiLeaks site. But Xnet has gone further, working not just through activism but also in Spanish politics and in the courts. 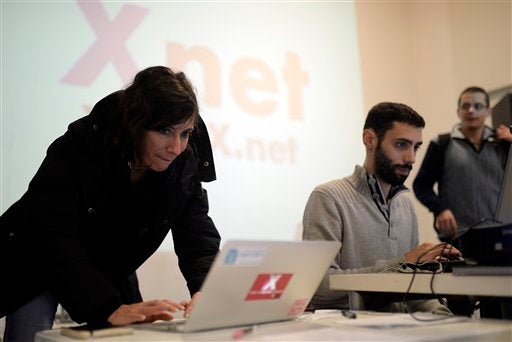 More than 200 volunteers are involved. The online drop box for citizens’ complaints they set up just three months ago has already paid off, exposing some of Spain’s biggest corruption scandals.

“Xnet is a peaceful guerrilla movement,” said Simona Levi, its spokeswoman and one of its founders. “We’re an evolution and a domestic adaptation of what we learned from WikiLeaks.”

Xnet’s biggest coup came in October, when it made public documents helping prove that senior officials at Spain’s bailed-out Bankia bank used undeclared credit cards from the bank to spend some 15 million euros ($18.6 million) on luxury goods, vacations across Spain and abroad, and even regular supermarket purchases.

The public outcry over the Bankia revelations, which are now under official investigation, forced Prime Minister Mariano Rajoy to apologize for the country’s mounting corruption scandals in an unprecedented speech in Parliament. It also ruined the reputation of Rodrigo Rato, Bankia’s former chairman, ex-chief of the International Monetary Fund and former Spanish economy minister.

At a time when numerous official investigations are underway into corruption cases affecting Spain’s main political parties, businesses and members of the monarchy, many government workers outraged over the excesses amid years of painful austerity measures have turned to Xnet as a safe way of divulging irregularities they encounter in official documents.

“Citizens have a clear need to feel that their voice is being heard,” said Eva Moya, an expert in cyber security and intelligence for Spanish company S21SEC.

Xnet’s Barcelona base is deserted during the day while its volunteers work their day jobs, but comes alive at night when members devote their free time for the cause. They meet in a sparse, high-ceilinged, white-walled room furnished with fold-out tables where they open their laptops and down coffee while working mostly in silence.

The electronic mailbox they run on two Internet networks receives about 60 allegations of wrongdoing each week. It is set up to ensure anonymity in the simplest and safest way possible: the informer accesses the Tor network to conceal his or her IP address. The Xnet staff say they don’t fear police surveillance, but encrypted communications systems are used for all work-related online exchanges.

Only those activists registered as journalists can read the emails in the drop box because Spanish law protects their professional right to withhold the informer’s identity in court.

The journalist activists filter the messages and usually discount 90 percent of the material sent in — gossip, complaints not backed up by evidence, personal information sent by separated couples or jilted lovers. Reports are drawn up on the remaining 10 percent considered worthy of follow-up, which are sent to a second mailbox that other Xnet members can access without seeing the original sender’s identity.

“All this stuff about hackers getting into a company’s systems and stealing information is a Hollywood myth. It’s not how it works in reality,” explained Sergio Salgado, an Xnet activist. “We know systems are watched now, after the (Edward) Snowden case. We have to take precautions, but what we do is public.”

Most of the information Xnet activists gather is fed to Spanish media as a kind of tip service so journalists can probe deeper. The original informer can choose whether to give their name or stay anonymous.

In a move that sets Xnet apart from WikiLeaks, a quirk of Spanish law allows citizens or groups to file criminal complaints for consideration by judges — and Xnet uses it to the fullest extent possible. The group’s legal arm sued Rato over the Bankia case thanks to crowdfunding that collected 20,000 euros ($24,800) in a single day. The government started its investigation only after Xnet acted.

“We act through the media but also through the courts,” Levi said. “It’s crucial for us that the Xnet tools are used to achieve concrete, focused and swift victories and that people can see it’s worth their while exposing corruption.”

Levi, a 48-year-old born in Italy, was a theater director but has always been interested in activism and the fight for new forms of democracy. She followed the birth of WikiLeaks closely and met its chief, Julian Assange, at the Computer Chaos Congress in Berlin, the largest forum for such ideas. She launched Xnet in 2008 with a plan to protect cultural freedom.

The project changed radically on May 15, 2011, referred to colloquially as 15-M, when the economic crisis gripping Spain gave birth to the “Indignados” movement. Tens of thousands of people, most of them young, took to the streets to demand more official transparency and changes to the way institutions work. In assemblies held in public squares, people who surfed the same web pages and shared the same concerns signed up for the Xnet project.

Pau Lopez is an interior designer by day and social media activist by night. He asked to work shorter hours at his job so he could dedicate more time to Xnet.

“We have all made big personal sacrifices,” Lopez said. “Over the past three years I’ve moved five times and broken up a relationship twice.”

Xnet’s political aims are assembled in a manifesto called “Democracy, period.” It calls for more institutional transparency, “Wikilegislation” — which would grant the general public the power to take part in drawing up laws — and the so-called “permanent vote” that would ensure referendums are held on lawmakers’ positions and important laws. To push their aims, the activists created Partido X, a political party that collected just over 100,000 votes in May’s elections to the European Parliament.

Xnet is a member of PILA, an international project due to be launched in the coming weeks.

Two of the driving forces behind the project are Herve Falciani, who allegedly stole information between 2006 and 2007 relating to 24,000 customers of the Swiss division of HSBC and distributed it, and Stephanie Gibaud, who revealed suspected money-laundering and tax fraud at UBS in France.

The goal is to bring together activists and organizations like Xnet from a variety of countries and create an international database of anonymous leaks that would help expose corruption worldwide.

“We want to gather all these common experiences, together with people of proven credibility, so we can process information more quickly on a global level,” Salgado said.