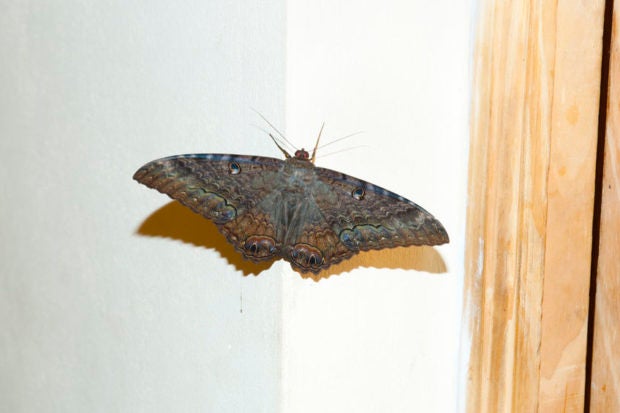 A researcher has documented the rare occurrence of months drinking the tears of unsuspecting and sleeping birds.

Biologist Leandro João Carneiro de Lima Moraes, of Brazil’s National Institute of Amazonia Research, recently published a study in the journal Ecological Society of America, which detailed his observations of moths feeding on birds’ tears. It is only the third such case published so far. The first case was found in Madagascar in 2007. The second was in Colombia in 2015.

Scientists call the behavior “lachryphagy,” wherein the moth would use its long straw-like proboscis to suck up nutrient-filled tears from a sleeping bird’s eyes. The proboscis is the same organ butterflies use to suck nectar from flowers. Moths were previously documented drinking tears from other animals, but cases involving birds were rare, reports Live Science.

Moraes observed the behavior at midnight on Nov. 7, 2017, in central Amazonia. He described the insect as an erebid moth sitting above the neck of a sleeping adult female black-chinned antbird. Rather than doing it discreetly, the moth was “constantly moving its proboscis toward the birds’ ocular area, sometimes resting it inside the eye and presumably feeding upon secretions (tears),” Moraes wrote in his report.

He would later stumble on the same circumstance involving a different bird and moth pair but which both belonged to the same species as the first one. In both cases Moraes said the moth’s activity didn’t seem to bother the resting bird, as stated in the report.

While the behavior may look harmless, Moraes suggested it may affect the birds negatively since they are not getting anything back from the moth. He said lachryphagy “may decrease the fitness of [a] target animal by increasing the chance of ocular diseases.”

Since these cases are rare, the event Moraes witnessed suggested moths don’t turn to birds as sources of nutrition very often. Perhaps the sodium found in the tears are the main draw since it is hard to come by in the flood-susceptible region of the Amazon where Moraes found them.  Alfred Bayle /ra