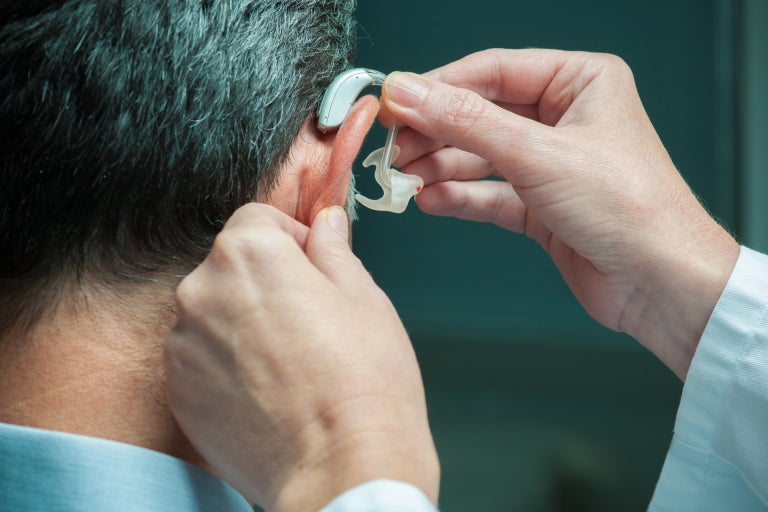 New United Kingdom research has found that people who wear a hearing aid for age-related hearing problems also appear to have better cognitive function as they age than those who do not.

Carried out by researchers at the University of Exeter and King’s College London, the new study looked at more than 25,000 people aged 50 or over, some of whom wore hearing aids. All participants were asked to take annual cognitive tests over a two-year period.

The findings, which were presented at the Alzheimer’s Association International Conference in LA, showed that the participants who wore hearing aids performed better in the tests which assessed working memory, which is the temporary storage and managing of information in the brain, and aspects of attention than those who did not.

For example, on one of the attention tests, participants who wore hearing aids showed faster reaction times, which the team explain is a reflection of their concentration. Everyday examples of concentration include “peering closely at an object of great interest” or “listening intently to someone speaking.”

The team says the findings provide early evidence that wearing an effective hearing aid may have a protective effect against dementia. They also noted that previous research from the Lancet Commission on Dementia Prevention, Intervention and Care has shown that hearing loss appears to be an important risk factor for dementia.

“Previous research has shown that hearing loss is linked to a loss of brain function, memory and an increased risk of dementia. Our work is one of the largest studies to look at the impact of wearing a hearing aid, and suggests that wearing a hearing aid could actually protect the brain. We now need more research and a clinical trial to test this and perhaps feed into policy to help keep people healthy in later life,” said lead author Dr. Anne Corbett, from the University of Exeter.

“We know that we could reduce dementia risk by a third if we all took action from mid life. This research is part of an essential body of work to find out what really works to keep our brains healthy,” professor Clive Ballard, of the University of Exeter Medical School, added,

“This is an early finding and needs more investigation, yet it has exciting potential. The message here is that if you’re advised you need a hearing aid, find one that works for you,” he said. “At the very least it will improve your hearing and it could help keep your brain sharp too.” JB

One work day a week enough for mental health boost—study