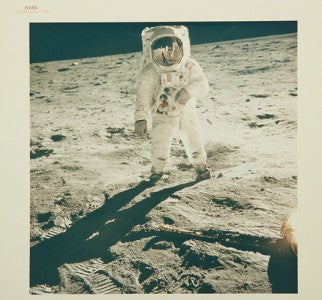 The auction house will hold its inaugural online sale dedicated to space photography from Nov. 26 through Dec. 2.

This dedicated auction will include a series of images that capture the historic Apollo 11 lunar landing of 1969, which celebrated its 50th anniversary this year.

These works span nearly a century of documentation through 1990, with a focus on the historic events that led up to Neil Armstrong’s first step on the Moon.

At the core of this online sale are 140 “Red Number” photographs from the holdings of photography collector and dealer Philip Kulpa, which chronicle the history of the United States space program from Gemini 4 through the shuttle missions.

Among them is a photograph that Buzz Aldrin took of his own footprint at Tranquility Base, as well as the famous Earthrise scene taken in orbit by astronaut William Anders — with both lots estimated between $3,000 and $5,000.

Sotheby’s will also offer selections from the estate of NASA’s first senior photographer, Bill Taub, who covered every significant event for the United States’ space agency from Project Mercury through the end of Apollo.

Astronomy enthusiasts will also be able to discover a number of “UFO” photographs taken by “Billy” Eduard Albert Meier, who is the founder of the Free Community of Interests for the Border and Spiritual Sciences and Ufological Studies.

Over the years, Meier’s images of unidentified flying objects have gained widespread recognition, with one of them being featured in promotional materials for the classic TV series “The X-Files” and now hitting the auction block for up to $9,000. 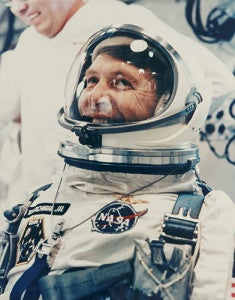 The sale, which brought in $5.5 million, was led by a Saturn V rocket model inscribed by various astronauts that fetched an unexpected $68,750.

“Collectors have actually been interested in space photography for a long time. Of course, this year being the 50th anniversary of the first Moon landing, there has definitely been increased interest in the subject matter, but honestly, this has been a gradual, rather than sudden increase,” Cassandra Hatton, who is Sotheby’s senior specialist, told Artnet News. IB/JB