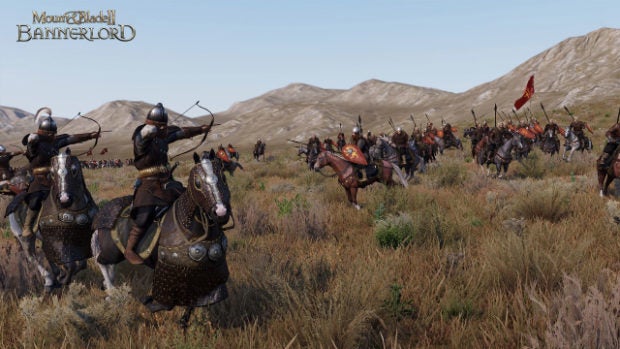 Not all roads lead to mass combat in “Mount & Blade II: Bannerlord”, but it is a huge part of the game’s appeal. Image: Courtesy of Taleworlds via AFP Relaxnews

There’s no social distancing on a medieval battlefield, as players pile into “Mount & Blade II: Bannerlord”.

After 12 years, fans of the original “Mount & Blade” have an official sequel to get immersed in with “Mount & Blade II: Bannerlord”.

The successes of “Chivalry: Medieval Warfare” (2012) and “Mordhau” (2019) proved that appetites for middle ages sword and shield combat never really went away.

Players can inform not only their character’s skills and abilities but also their entire life story, decision by decision.

Once out in the fictional lands of Calradia and traveling among its rising factions, they can trade goods between cities, train in the various arts of combat, take part in arena tournaments and build their following by recruiting assistants, clan members and entire armies, as the call of massed battle beckons.

“Mount & Blade II” finished the week ending on Sunday, April 5 as Steam’s best-selling game, recording an all-time player peak of 248,216 (per SteamDB), far above the highs of revamped predecessor “Mount & Blade: Warband” (33,054 in 2014); it was approaching a similar tally on Twitch.TV with a release day high of 243,038 viewers (per SullyGnome).

Could “Mount & Blade II: Bannerlord” release on console, and if so, when?

“Warband” did, eventually, in 2006, after six years on PC as a PlayStation 4 and Xbox One game.

Asked directly as “Bannerlord” released, a representative for “Mount & Blade” studio Taleworlds confirmed via tweet that yes, “we’ve always said it will be released on consoles, but further down the road,” as right now the team is focused on fixing up and improving “Bannerlord” for its early adopters on PC.